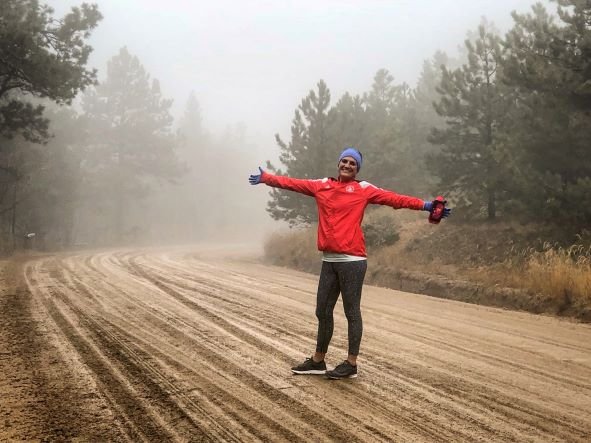 A Q&A with Marissa DeMercurio, FCRC member and RRCA Level I certified trainer.

1. How did you get into running?
Running has always played some sort of role in my life. My 4th grade teacher, Mr. Kruse, started a running club at my elementary school and his student teacher, Miss Hamm, had run in the most recent Olympic Marathon Trials. They both helped to kick that group off. That was the first official run club of my young memory. But my parents were endurance runners most of my life, with my mom being particularly talented. My mom also served as the President of the Fort Collins Running Club for a time and had a real influence on setting the stage for the FCRC to focus on growth and outreach at a time when membership was quite limited. As a kid, my running was limited to mostly holiday runs like the FireKracker 5k, the Colorado Run, and the Thanksgiving Day 4 Miler, because my focus sport was swimming. But when I was 20 I was going through a particularly difficult time personally and found that
heading out the door for a short, hard effort run seemed to be the only thing that would ease my anxiety. My dad started taking me out on his morning 4 – 5 milers that summer and taught me a lot of basics about endurance, form cues, breathing, and mindset. The rest was history. I signed up for a half marathon within a few months and he ran my first half marathon with me in 2005. Several years later, my mom ran my first full marathon with me in Chicago in 2009.

2. How did you get into training other runners?
I started coaching other athletes relatively informally. I was one of the founding members of the Arvada Runners around 2015 and helped to grow the group from just a few people who showed up to run periodically to a close-knit, dedicated, enthusiastic group of ambassadors for the running community. Through the building of that group, I was probably viewed as someone who knew what they were doing. (You’d have to ask them. They may laugh at the notion!) I was often sought out for advice and tips. I am a constant learner- subscribed to many running newsletters, have a bookshelf filled with books on running about training  methodologies/theories/approaches/disciplines/life experiences, and listen to hours of podcasts every week about anything from race reports to sports psychology, etc. So I was able to help athletes talk through different approaches to seeking their running goals. Over time I just started officially taking on athletes and eventually got RRCA Level I certified because some clients find that credentialing to be important. One of my favorite early athlete stories was Arvada Runner Matt Jackson, who was already quite fit and experienced in his running regimen. The challenge was repurposing his training structure so that it allowed him enough recovery between runs that his runs could be faster, more purposeful, and therefore more effective. Over the course of about six months together, Matt set a significant 1/2 Marathon PR during his marathon build up and went on to qualify for Boston. He got to line up in Hopkinton the next year and catch that unicorn!

3. What are your favorite success stories?
I’ll share two. Both are current members of the FCRC.

First is a story of my husband, Pete Kardasis. Pete fell in love with trail and ultrarunning when we met living in San Francisco. In 2015, Pete got into the Leadville 100 (his first attempt at the distance) and dropped out shortly after mile 50 as he had been dealing with unbearable stomach distress for hours on end. After that race, he had unfinished business up in Leadville and entered the lottery every year until he got in again in 2019. By then I was coaching several athletes and he asked for my help to build a plan and an approach that would bring him to the start line more prepared than ever to succeed. Contrary to more conventional mountain ultra training plans, I had him do a significant portion of his training on flatter and faster terrain with speed work aimed at one thing: building his running economy so running faster felt easier. (This is a Some Work All Play training 101 approach, to give credit where credit is due.) He still did weekend long runs in the mountains, but we ensured he went into that race aerobically fitter than ever. He made it though mile 50 moving really well, picked up his pacer, and they headed back over Hope Pass. Things got bad. The stomach distress returned with a vengeance. Pete made it into the mile 62 aid station with just minutes to spare before the cutoff. We changed his socks, filled his pack, shoved him over the timing mat with some mashed potatoes mere moments before they would have cut off his bib, and off he went with pacer #2 into the night. Over the next few miles his stomach calmed and he tapped into his running economy like nobody could have predicted. He was passed by only 2 people in the final 38 miles and passed nearly 100 people, finishing with over an hour and 20 minutes to spare before the cutoff. It was truly a sight to behold! I was so proud of him.

The second story is a more recent success: James Baumhover took 24 minutes off of his marathon PR at the Berlin Marathon this fall! James self-admittedly has struggled to follow training plans in the past, but he’s never had a plan customized to him specifically. That’s a challenge with generic plans– they’re written for ‘everyone’ but they’re specific to no one. So the most important thing we did was design a plan that let him tell me what he did and didn’t like about the training plans of his past. (Hint: Not all long runs need to be slow! Don’t be afraid to spice them up from time to time!) We also worked on his running economy because he had come off of a giant trail block and had gotten very comfortable with slogging along. James did two things incredibly well: He listened to and followed the intention of every single run for his entire plan, and he spoke up when he felt less than 100%. In this way, he was extremely consistent which became his superpower, but his transparency when he had an ache or a pain allowed us to react quickly and proactively to add in 1-3 full rest days so the pain didn’t worsen and take him out for longer. Come race day, I knew James’ time goal was far more conservative than what he was capable of running that day, but he honored what he came to do- have fun, enjoy Berlin, set a PR, and see what’s possible. He did all of those things. (He also made it clear that my next goal for him, to qualify for Boston, was not his next goal for himself. Ha! Fair enough.) He’s amazing and I was so
thrilled for him to see his consistency pay off in such a cool way.

4. What do you love about training?
First and foremost, the community of friends I have made through the process of training. We have such a limitless source of support, camaraderie, laughter, and companionship when we surround ourselves with runners. They turn the worst days into the best days. But within the process of training itself, I enjoy setting goals way out into the future, taking the time to sit down and imagine what it would take to achieve that goal based on where I am today. I like building the framework of possibility. And finally, speed work! I love big, hairy workouts that scare me before I start. Then when I finish them I realize I am stronger than I thought I was. And I love workouts where I am so confident it will be easy and they chew me up, spit me out, and leave me hungry to try again.

5. What questions does a trainer need to ask a runner and consider in developing an appropriate plan?
A training plan needs to start with where the athlete is today: physically, mentally, and emotionally. It needs to consider an athlete’s history: injury, diet/nutrition, race performance, and ability to follow-through. It requires a clear understanding of what else is happening in their life and working the plan around those things. I am a firm believer that running can enrich our lives but it should not become our lives. And it helps to know how they respond to accountability. Some people can take a 20 week training plan with no follow up and follow it to the letter every day until race day. Some people have more success when their coach checks in with them daily or weekly. Others resist accountability altogether- they think they want a training plan and/or a coach, but the moment you give them structure they immediately do the opposite of what they were given. (Those people are rebels and I’ve learned to spot them from a mile away!) Each style requires a different approach than the others. Rebels need a ton of freedom and choices built into their framework with the ability to make changes on the fly. Ultimately, the runners with the most success are the ones who find a coach with whom they have the best relationship. There is no coach that is the right fit for every runner. I certainly am not the right fit for everyone. So the coach/athlete relationship needs to be based on mutual trust, respect, and honesty. That will yield long-term success.

6. How does your approach with other runners differ from your approach with your own training?
I think it’s really difficult to be objective about your own training. So I can look at someone in the exact same condition and shape as me and I would give them better, smarter plans and advice than I would give myself. That’s just because we are so influenced by our own skewed lens of ourselves. So when I am casually running and not pursuing big goals, I apply a general framework and philosophy to my training week like I would my athletes (one long run, probably one workout, mostly easy, a few days with strides.) But I loosely follow it and I allow a lot of room for freedom and creativity to have fun, do whatever feels good, and jump into whatever my friends want to do to keep good company. However, if I am pursuing a goal with any sort of seriousness, I hire a coach because I love (and need) the external accountability. But perhaps most importantly, for any of us who are seriously pursuing any goal, we usually need someone objective more so to tell us when to back off, take a rest day, or give ourselves a little more grace than we&#39;re prone to do without some extra help. We don’t usually need someone telling us to go harder. A coach, even for coaches, is such a worthwhile investment.