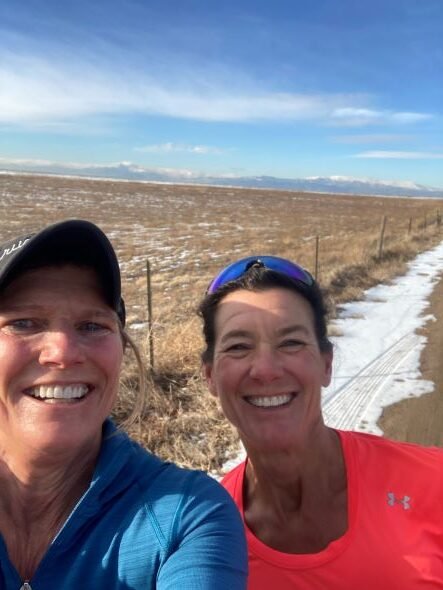 Strolling Down the “Boardwalk” of My FCRC Membership

Running this morning with one of the many friends I have made through the Fort Collins Running Club, I was reminded of why I joined the club in the first place. Cheryl said she was going to volunteer at the next Tortoise and Hare to learn what it was all about. I told her the  T&H’s were why I joined the club, 9 or 10 years ago. It was winter, and I didn’t have any races coming soon, and I wasn’t doing speed work. I figured, if I joined the club, I’d at least get monthly speed work with the Tortoise & Hare runs.

My first one was the Edora Park 8k, and I was hooked. I had never run the T&H format before, but it was fun seeing how many people I could catch on the return. Back then, you were given a popsicle stick when you finished, and I didn’t even understand the system. “Why was I just given a popsicle stick??” But I really didn’t care how I placed, it was just a good workout that I wouldn’t have done on my own.

Fast forward a few years to the spring Equinox ½ marathon at the Budweiser plant. It was a gorgeous day and I enjoyed seeing a lot of my running friends in the Event Center after the race. That was when Connie DeMercurio asked me if I would consider being on the Board of the FCRC. I had never thought about it, but my youngest kid was graduating high school that spring, and I knew I would have more time on my hands. I told her I would think about it. Ultimately, I did join the board later that year, 2016.

I still remember nervously walking into the first board meeting, knowing only Connie, but all went well. I also remember the first few months feeling like I wasn’t contributing. I went to the monthly meetings, but I wasn’t doing anything beyond that. Back then, we had a lot fewer committees, just race sponsorships, race committee, and the relatively new Running U. Before long, I joined in with the Running U committee, and then later the race committee. The more involved I got, the more fun I had on the Board.

Somewhere after that first year on the Board, I talked current club President, Chris McCullough, into joining the board too. Good move! Throughout the past 6.5 years, a lot has changed: we now have many more committees to be involved in: Community Grants, Track, Social, EIO, Race Team, Policy.
We’ve started many new programs including the race team, the new member runs, Gifted Feet, a book club, a track series, the Segment Showdown and much more!

I am not sure what the membership numbers were when I first joined the club, probably just a couple hundred. By the time I joined the board, we might have been up to 300 or so, and now we are around 900, hoping to get to 1,000 this year. Refer a friend and if they are the 1,000th member, they will get a free year.

All the growth and new activities would not have been possible without the foundation set by Connie, Dan Berlin, Nick Clark, Tom Schipper, and many others. Much of the backbone of the club has been around far longer: the Tortoise & Hare races, the Horsetooth Half and the FireKracker 5k, the race discounts and more. In fact, the club was started over 50 years ago. But it’s super cool to see how much we have grown too. If you are new to the club, I encourage you to find a way to get involved, whether it is going a group run, joining a committee, or participating in the Segment Showdown. If you do, you may find you make some of your best friends ever while running around town!