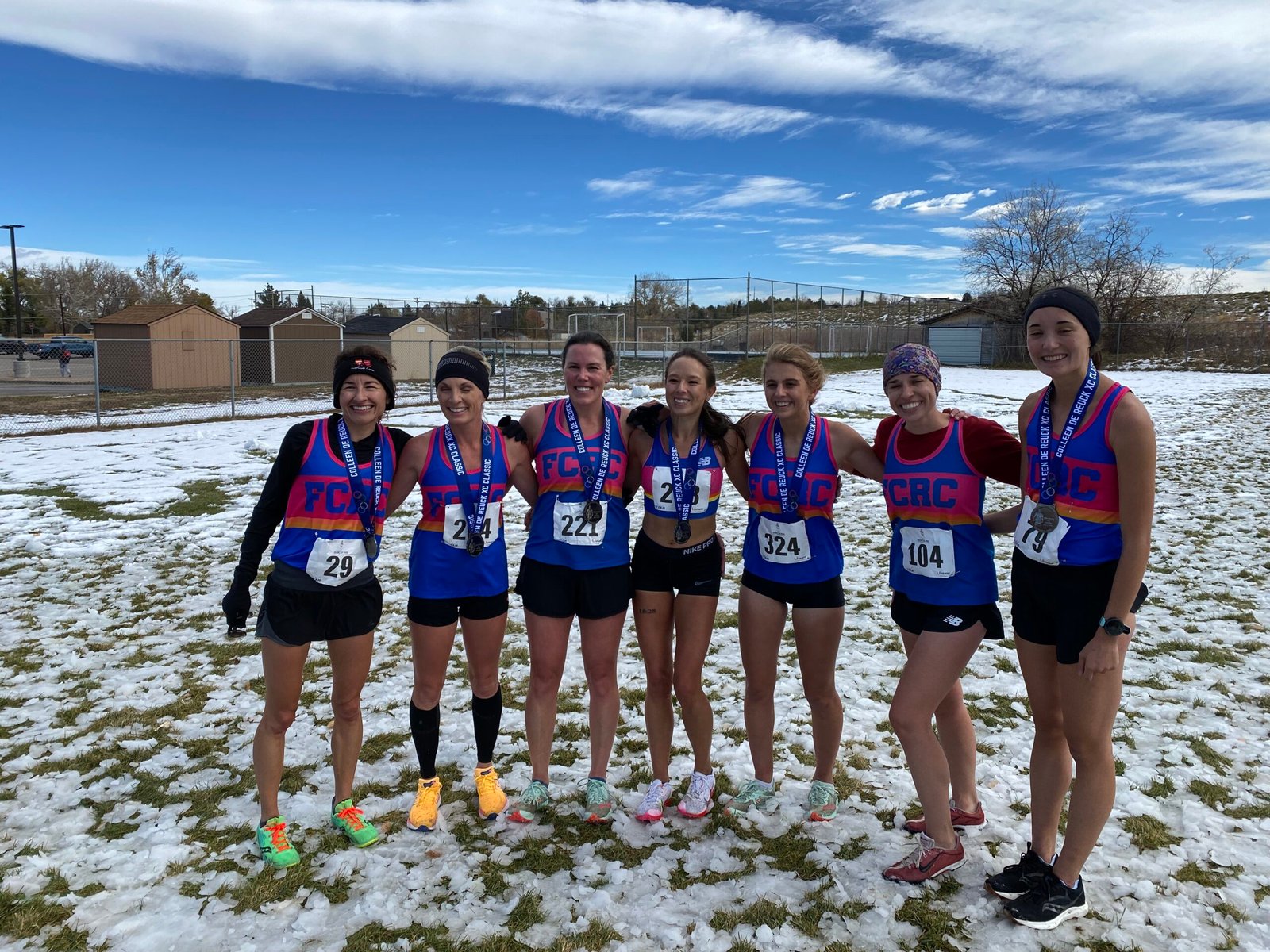 The FCRC Racing Team made our way to Boulder on Saturday, November 5th, for the pinnacle of Colorado club team racing – the USATF Colorado Cross Country Championships.

We should have known something was amiss when we received an email from the race director late on the night before the race stating the awards ceremony would be cancelled because the volunteers were already “too worn out from setting up in the snow.” Having received only a light dusting of snow in Fort Collins, we just assumed the Boulderites must be weak.

We showed up on Saturday morning to six inches of snow on the ground and 25 mph winds. Real cross country weather. Last year this race was too hot, this year we almost froze our feet off warming up.

Our very own Shelley McDonald won the women’s masters title, handily defeating the one and only Kara Goucher who had hopped in the race at the last minute!

Our 50+ women’s team was led by over all Masters Women Age Graded Champion Cheryl Aley. Tina Duncan and Heli Uusitalo rounded out the 50+ team who won a silver medal, narrowly losing to Boulder Road Runners by only 4 points. Heli impressively ran a faster time than last year on this course in MUCH tougher conditions.

In the open race, our men were neck and neck with TEAM Boulder and emerged victorious by a mere 3 points. Carson Hume was second overall for USATF athletes followed closely by Nick Costello in third. Tait Rutherford, in his first race in three years, was our third open male across the line with Weston Christensen and Rob Jenson strengthening the team in the 5th and 6th team spots. Wes’s seven second defeat of TEAM Boulder’s fifth runner clinched FCRC’s victory.

The open women won their first Colorado state title, led by Jessica Cunningham who managed to run twenty seconds FASTER than last year on this course despite the snowy windy conditions. Rachel Hulse was our second open woman across the line, followed by a good group of Candice Chavez, Ivy Glade, and Elizabeth Marsh. Becca Rauch managed an impressive time despite lacking spikes and “Momma Bear” Kierann Toth brought up the rear as our seventh runner in her last cross country championships in the open division before moving up to masters next year.

Highlights from the race included the epic snowy, windy conditions which had track bags blowing away like tumble weeds, pony tail holders being blown right out of her hair, shorts being made to look like bun huggers regardless of original style, and race bibs practically blowing off jerseys during the race. There was also a dude in the open race who missed the start by 90 seconds and then ran so hard he almost caught the lead woman.

It was also neat that the women’s open team age gap was 19 years – Lizzy Marsh was closer to Kierann’s son’s age than her own.

For those who ran the course last year but missed it this year – you may remember that the baseball diamond surface was the most challenging part last year…well this year that was the easiest terrain as there was only about 100 ft of clear ground the rest of the course!